It would be a real shame to visit Podravinia and miss stopping by the house where Croatia poet Petar Preradović was born in the village of Grabrovnica. Until recently, it was dilapidated and attracted few visitors, but that has all changed. The district of Pitomača has renovated the building and turned it into a poetry center.

Petar Preradović, was born in 1818 in Grabrovnica, near Pitomača. His father was an Austrian NCO, so his mother sent him to the military academy in Wiener Neustadt after his father's death. Preradović served in Milan, Zadar, Zagreb, Cremona, Vienna and other parts of the Hapsburg Empire. He fought in every campaign the Empire waged in those years. He finished his career with the rank of general and was aide-de-camp to Ban Josip Jelačić. He started writing poetry in German, when he was still a student. He was introduced to the ideas of the Croatian rebirth movement by Ivan Kukuljavić Sakcinski. During the 19th century, along with Ivan Mažuranić and Stanko Vraz, Preradović was the central author of the Croatian cannon, with the status of a national bard. He is considered one of the most important Croatian poets of the Romantic period. We spoke to Rajko Stilinović, the project manager who worked on the renovation of Predradović's family home. 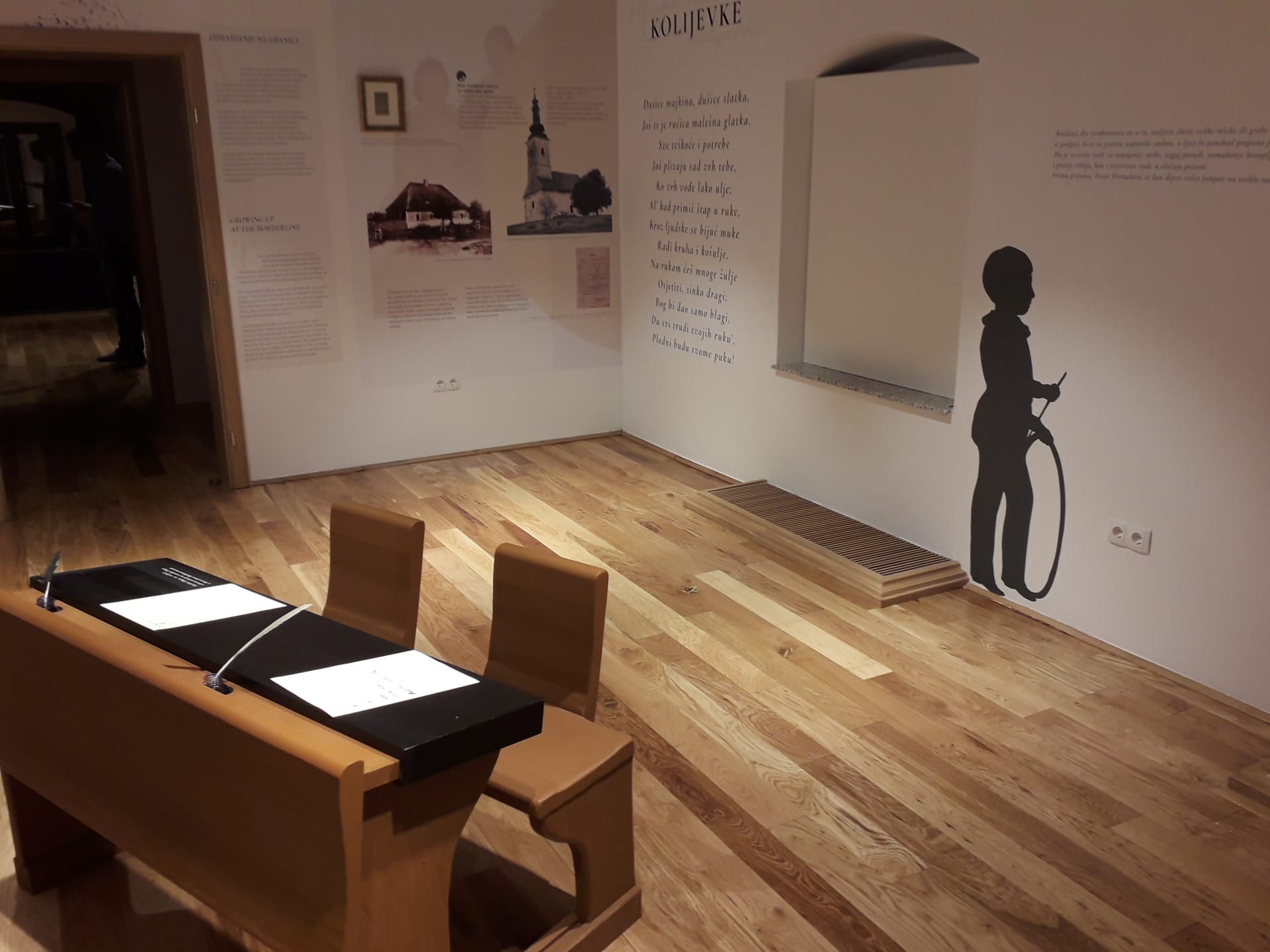 “The goal of the architectural project was to ensure the building was a recognizable landmark, the exterior of the entire space had to retain the look that was typical of the time when it was built, while the interior had to be done in such a way as to provide a multi-functional space - a space not only that will represent Petar Preradović as a poet, but Petar Preradović in all the aspects of his character. That is, the mystical motifs in his poetry, Preradović the general, Petar the boy, Petar the world traveler, Petar the lover and all of that. We will try to present this with the content of the interior and make it an attractive space,” says Rajko Stilinović, the architect who worked on the renovation project.

Stilinović underscores that the space can also be used for other types of public events, such as presentations, launches, and seminars. He draws a parallel with what Ogulin has done with its most famous historical figure, the fairy tale author, Ivana Brlić Mažuranić. Stilinović sees the center as a cultural treasury, an education center, and a place of creativity and development for the whole community. The space houses a modern exhibition inspired by the poet's life and work. After many years of trying to raise funds for the project, the financing finally came through with assistance from the EU and the Croatian government, according to the head of Pitomača Municipality, Željko Grgačić. 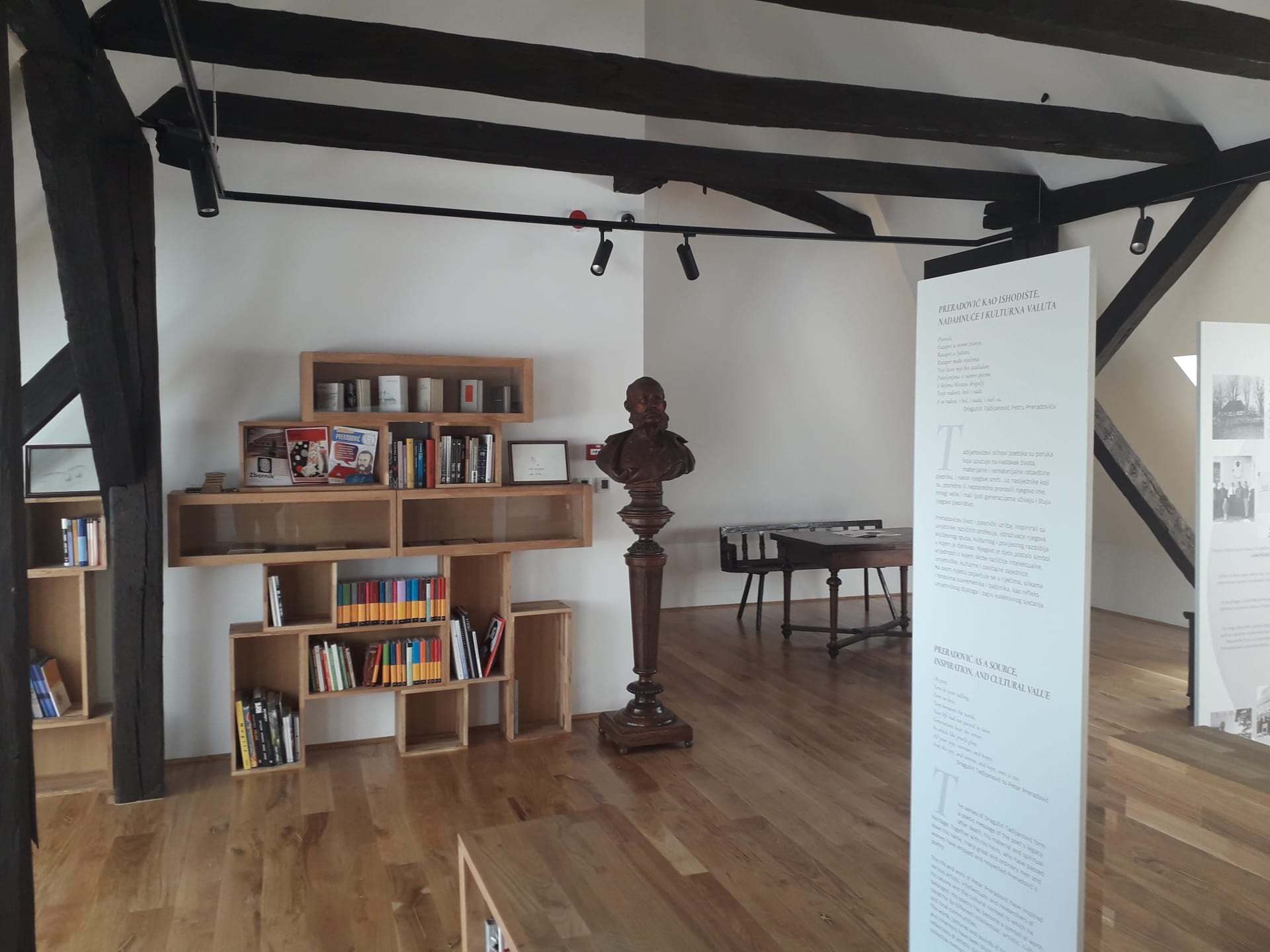 “We've been working on this for some eight, nine years, however, we were not able to get the financing, until now. We got lucky and everything worked out nicely, as we like to say. Thanks to Minister Tolušić, when he was still at the Ministry of Regional Development, we managed to secure cross-border cooperation with our partners in Hungary," Grgačić said.

Marinko Barčan, who worked on the renovation, took us on a tour of the interior. He showed us a sculpture that was in the old museum collection, which was a gift from Preradović's descendants in Zagreb. There is also an original edition of Preradović's first collected poems, Pervenci, and all of his other collected works that were published after his death. There are some ethnographic objects from the old collection such as this trunk from 1866, a commode, a table and benches. The other objects are pieces of art that were inspired by Petar Preradović, uncluding a number of works by artists who painted either Preradović's portrait or landscapes of the village and its surrounding areas. There is also an original painting of Preradović's daughter, Zora Preradović.

“In the basement, there is a hologram that we thought would be a great way for visitors to have an intimate encounter with the poet himself, who speaks about his life in seven specific stories. Of course, all of them are historically accurate. The text was adapted for dramatic purposes, but based on existing facts,”  Barčan explained.

The house where Petar Preradović was born was originally turned into a museum in 1968, on the 150th anniversary of Preradović's birth. This latest renovation has modernized the space to meet today's standards and a new vision for the space.